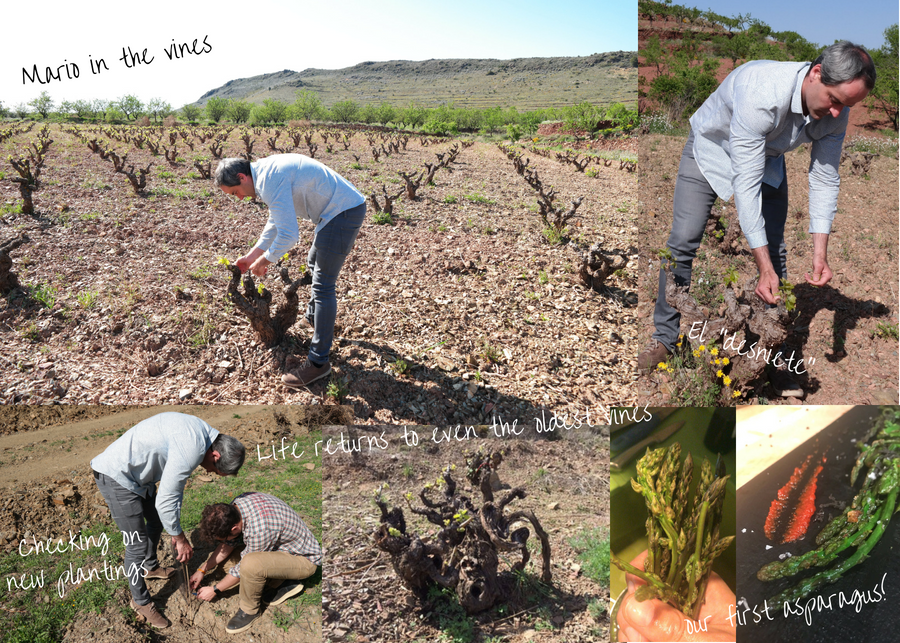 29 MayGetting our hands dirty: life returns to the vines

This month the main focus has been on the vineyards, although the fact that we’ve already sold out of two wines (as early as April!) has given us a bit of an admin headache as we try to manage stocks. Plus we had lots of visits from various importers from the USA and Belgium as well as a very pleasant visit from the Norway-based Aina Mee Myhre who graduated as a MW at the same time as Fernando. We always take our visitors out to see the vines as they are such a key factor for us and this is a great time to see life returning to the vines.

Although we haven’t spoken much about our vines in previous newsletters, it doesn’t mean that Mario López, our viticulturist and winemaker has not been busy in our vineyards. Far from it. Even in the winter, he visits the vines on a weekly basis, pruning, ploughing, fertilising with manure and replanting. Now spring has finally arrived, his visits will be even more frequent as he keeps an eye on every stage of the growth cycle.

We went out with him and Fernando at the end of April to find out more about how things are progressing this year. This winter was fairly cold, with snow on higher areas such as the Jardín de los Iguales – good for keeping diseases at bay – but what has really marked the year out so far has been the heavy rainfall. 201hl of rain fell in the first four months of 2018, compared to 58hl last year. Rain in winter is always welcome, particularly in an arid area like Aragón, and after several extremely dry years, this reserve of water makes for a very positive start.

The first thing to happen at the start of the growing season is the sap rising and then budburst, which occur when the soil temperature rises above an average of 10ºC. Mario commented that this year, these processes have been running about 10 days behind average due to the cold, wet weather. In many ways, this is good news as the later the buds begin to sprout the less likely they are to be damaged by any spring frosts, although it is far too early to make any predictions about this year’s vintage.

Activity returned first to the alluvial, lowland vineyards in Épila that supply our Botijo wines and the highest parcel, El Jardin de los Iguales, was the last to shoot, but by the end of April, buds had appeared in all the vines, even some of the new plantings, new vines planted on their own rootstock directly from cuttings.

This means that Mario has been busy suckering or shoot thinning. This consists of removing – on-by-one – any unproductive shoots so that the plant concentrates its energy into producing grapes and doesn’t waste energy on growing lots of leaves. It’s a tedious job but one that will have a great impact in terms of quality.

We’ll keep you posted as the growth cycle progresses.

Oh, and we’ve already had one harvest in El Jardín de los Iguales – our first asparagus – it was delicious!