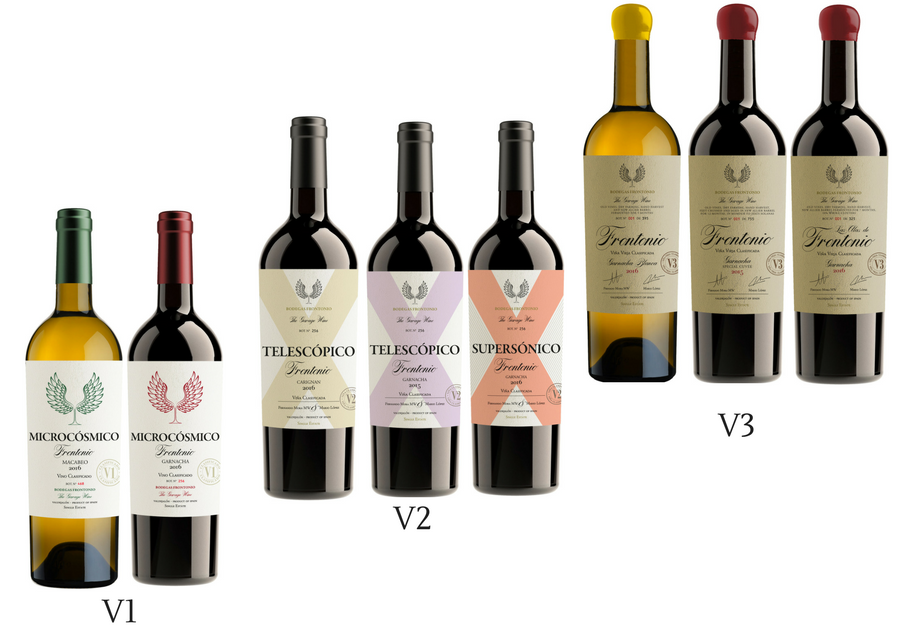 Each month we’ll be getting out the chalkboard to teach you about an aspect of our wines in greater depth. This month find out more about Frontonio – we’ve just relaunched the range with new labels so read on to find out more.

We’ve just redesigned the labels for the Frontonio range in the aim of making the distinction between the ranges much clearer. As well as highlighting the name on the label, we’ve also added their classification within the new V1, V2 and V3 system of classification as defined by Fernando himself in his Master of Wine Research Paper.

Firstly, why Frontonio? Frontonio is named after the Patron Saint of Épila, in Valdejalón where our wines are made. According to legend, he was decapitated as punishment for his Christian faith; his head was thrown into the River Ebro in Zaragoza, and his body was buried in the cemetery. Miraculously his head later appeared going upstream on the banks of the River Jalón, in the Épila area. Likewise, our limited production micro wines are also the result of going against the current and are also something of a miracle.

Vino Clasificado V1. – Classified wine
This is our “Villages” level wine. Blended from a range of different old vineyards in the Valdejalón from gentle slopes to parcels of slate and chalk at high altitude. Microcósmico white is 100% Macabeo and the red 100% Garnacha. Both are made in concrete tanks for a fresh and pure style.

Vino de Viña Clasificada V2 – Wine from classified vines
Distinguished by a X on the label these are the equivalent of Premier Cru wines. Made in smaller quantities from single vineyards and with greater oak influence or techniques such as lees stirring to introduce more body and texture, these are richer, more complex wines.

Vino de Viñas Viejas Clasificadas V3 – A wine from classified old vines
Our Grand Cru-level wines made in very limited quantities (less than 1000 bottles/vintage). These wines are a reflection of our very best parcels of dry-farmed old vines. They are distinguished by cream-coloured labels and wax seals instead of capsules.

Top quality 300l Allier barrels are used for the ageing of these wines, which include a 100% Garnacha and a Garnacha Blanca, both from very old vineyards.

Alas de Frontonio Garnacha is floral and unique, coming from a parcel of high altitude vines grown on slate soils.