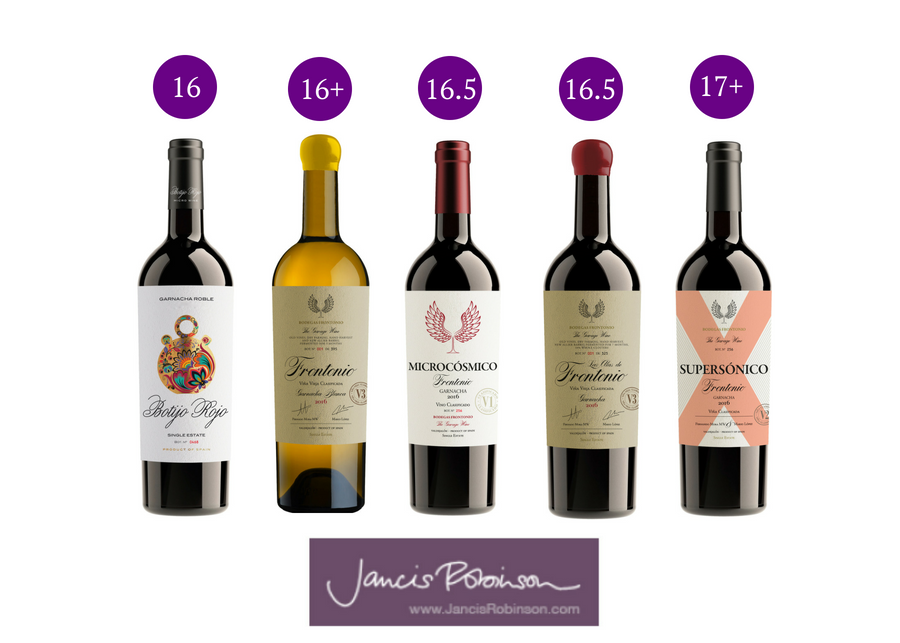 Fernando was excited to be interviewed by Jancis Robinson MW in London recently for an article that has just been published in the Financial Times.

Entitled “the renaissance of Spain’s Garnacha grape” Jancis comments that “There are signs of change in how the variety is viewed – ambitious, sophisticated Garnachas are proliferating.” Alongside Daniel Landi who produces Garnachas in Gredos, Jancis quoted Fernando talking about the quality of the north-facing, high-altitude vineyards of old vine Garnacha in Aragón that go into the Bodegas Frontonio wines, and ends by saying “Spain has a bright future ahead if foreign importers are able to introduce these wines to the rest of the world.”

She gave great scores to the Bodegas Frontonio range, including 17+ -Jancis scores out of a maximum of 20- to Frontonio, Supersónico Garnacha 2016 which she described as “undoubtedly a very fine wine that makes an impression in a line rather than a cloud, somehow. Very refined and polished with a sort of ‘slatey’ end. Super fresh. A fine modern Garnacha/Grenache. Not yet at its apogee.”

And, according to Jancis, a future launch from El Jardín de los Iguales has a “Very charming nose with edgy fruit and lots of acidity and chew. Extremely dramatic with so much personality but for the moment it’s for chewing rather than drinking. Pitu Roca of Can Roca suggests waiting until 2020 before launching it apparently. Really fine and racy.”

You can read more about the Frontonio range here.